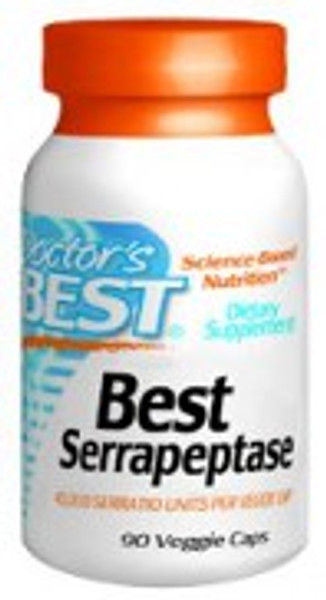 Serrapeptase is a proteolytic enzyme isolated from the non-pathogenic Serratia bacteria species found in the digestive tract of the Japanese silkworm. Serrapeptase has been used as a nutritional supplement in Europe and Asia for well over three decades. Each enteric-coated vegetarian capsule of Best Serrapeptase and Best High Potency Serrapeptase contains pure serrapeptase designed for optimal absorption in the intestinal tract.
Serrapeptase has been used widely in clinical practice in Japan and Europe for decades. Dr. Hans Nieper, a legendary medical doctor known for his extensive use of proteolytic enzymes, named it the Miracle Enzyme because of its unique abilities.
Note: Best Serrapeptase is quantified in Serratiopeptidase units, which refers to the enzyme activity level. Enzymes like Serrapeptase are not measured in milligrams (mg), but in an unassociated measure of units. Best Serrapeptase has 40,000 Serratiopeptidase units per capsule, which is considered a very high amount of activity.
*More information below supplement facts*
Suggested Use: Take 1 to 3 Capsules daily away from food.
Other Ingredients: Cellulose, modified cellulose (vegetarian capsule), enteric coating (HPMCP).

Contains nothing other than listed ingredients

As with any nutritional supplementation program, it is best to consult your physician before beginning consistent enzyme supplementation. Enzymes such as Serrapeptase are safe for most people when used according to the recommended dosage. People prone to forming blood clots, such as those with arterial fibrillation or with chronic venous insufficiency, should consult their physician before using Serrapeptase. People with other bleeding disorders, ulcers, those whove had neurosurgery or ischemic stroke, or those taking blood thinning medications should also consult their physician before taking any enzyme supplements.

Serrapeptase has been used widely in clinical practice in Japan and Europe for decades. Dr. Hans Nieper, a legendary medical doctor known for his extensive use of proteolytic enzymes, named it the Miracle Enzyme because of its unique abilities. Serrapeptase is made by the bacteria Serratia E15 found in the digestive tract of silkworms, which harness the serrapeptase enzyme to break down food and the walls of their silk cocoons as they emerge in their moth state.

Proteolytic enzymes function in the body to digest and break down proteins into their amino acid components. When taken as supplements away from meals, these enzymes enter the bloodstream and are available to facilitate chemical reactions throughout the body.1 They work in part by helping to support a healthy inflammatory response and by modulating the immune system. Serrapeptase may facilitate a more balanced release of bradykinin (presumably downplaying bradykinin receptor B1 activity).2, 3

In terms of strength, serrapeptase recently demonstrated a greater ability to promote a balanced inflammatory response compared with two powerful proteolytic enzymes secreted by the human pancreas, chymotrypsin and trypsin.4

Serrapeptase has been used for years in Japan for supporting healthy sinus function. Studies thus far suggest that serrapeptase is a promising, safe, and useful supplement to help support the immune system and promote favorable viscosity of nasal mucus.5, 6 In one controlled and randomized open-label study, researchers observed the effects of 30 mg/day (equivalent to ~ 60,000 units of activity) of serrapeptase on the sputum of 29 individuals. After 4 weeks, those taking serrapeptase had significantly less morning sputum, and it was thinner and less elastic in nature compared to those taking placebo. The serrapeptase group also had fewer neutrophils in their sputum, signifying a more balanced immune response.7

Doctors Best discloses the potency details of Serrapeptase so you know exactly what you're getting. Enzyme strength is measured in terms of activity. Enzymes may be present, but unless they are functional, they will not be useful. Instead of being measured by weight (such as in milligrams), the important measurement with enzymes is the activity and potency of the enzyme. A product label should list enzyme strength in standard activity units rather than by weight. To meet your individual needs, there are two levels of potency to choose from in the Doctors Best line of Serrapeptase enteric-coated vegetarian capsuleseither 40,000 or 120,000 Serratiopeptidase units.
Scientific References
*This statement has not been evaluated by the Food and Drug Administration. This product is not intended to diagnose, treat, cure or prevent any disease.