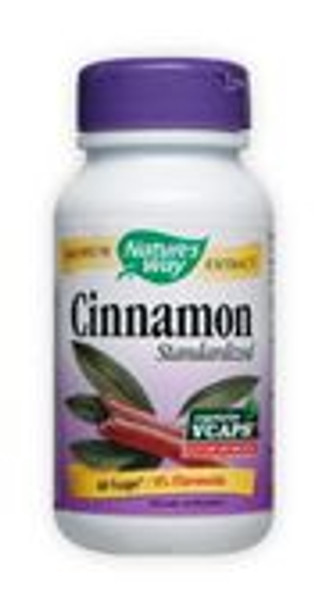 60 Capsules - 30 Day Supply
350 mg Cinnamon Bark
150 mg Cinnamon dried water Extract
Standardized to 8% Polyphenols
Combining the extract and bark results in a premier formulation that yields a full range of cinnamons constituents.
Cinnamon may help:
• Support healthy blood sugar levels
• Prevent the formation of fatty build-ups in the arteries through its antioxidant properties
• Improve cholesterol levels
Cinnamon has since the ancient Egyptian times been used for both medicinal and culinary purposes. Traditionally cinnamon has many uses. It has wound healing (antibacterial) properties and has even been used to treat the common cold. Researchers only recently discovered that cinnamon has other health benefits - it helps to control blood sugar levels and cholesterol levels in Type 2 diabetics.
Supports Healthy Blood Glucose Level
Much more than a simple flavoring, cinnamon can spice up your health. Derived from the bark of the cinnamon tree, cinnamon is one of the oldest remedies used in traditional Chinese herbalism for digestive support. Recent scientific studies have shown cinnamon may support healthy blood sugar levels, when used as part of your diet, by activating insulin and glucose transport and improving glucose metabolism.

A 40-day human study with 60 people, given 1, 3 or 6 grams of cinnamon daily, found that all three levels of cinnamon reduced the mean fasting serum glucose (18-29%), triglycerides (23-30%), LDL cholesterol (7-27%), and total cholesterol (12-26%) levels. The most significant results were found with 3 grams of whole cinnamon bark

In addition to improving cellular glucose metabolism, cinnamon may provide other benefits through its antioxidant activity. Cinnamon contains flavonoids, which are potent antioxidants and may be synergistic with vitamins and trace elements. A study published in the Journal of Agricultural and Food Chemistry found that water-soluble polyphenolic polymers in cinnamon may function as antioxidants, potentiate insulin action, and may be beneficial in the control of glucose intolerance.

How does cinnamon extract reduce blood sugar levels?The active substances present in the cinnamon extract are responsible for helping reduce glucose levels by increasing glucose uptake, promoting glucose metabolism and improving the action of insulin via its antioxidant effect.

How does cinnamon extract improve cholesterol levels?Oxidation is a process which changes low-density lipoprotein (LDL) into fatty build ups in the arteries. This process is called atherosclerosis and can lead to heart attacks and strokes. Extracts of cinnamon have potent anti-oxidant effects which may help prevent the formation of these fatty build-ups in the arteries.

Diabetes is also associated with high triglyceride levels. Insulin promotes the breakdown of these triglycerides. Cinnamon extract improves the action of insulin therefore it helps decrease high levels of triglycerides in the diabetic patient and in turn reduces total cholesterol levels.

A recent placebo-controlled human clinical trial has shown that whole ground cinnamon significantly reduced fasting glucose levels by up to 29% (almost ) and cholesterol levels by up to 26%.

Vcaps® is a trademark of Capsugel. Other Ingredients: Plant-derived capsule, Magnesium stearate
Precautions
Not for use during pregnancy and may cause allergies for people sensitive to cinnamon.
Blood Sugar, 90 Capsules
Chromium Picolinate, 100 Capsules
Completia® Diabetic (Iron-free), 90 Tablets
none
*This statement has not been evaluated by the Food and Drug Administration. This product is not intended to diagnose, treat, cure or prevent any disease.