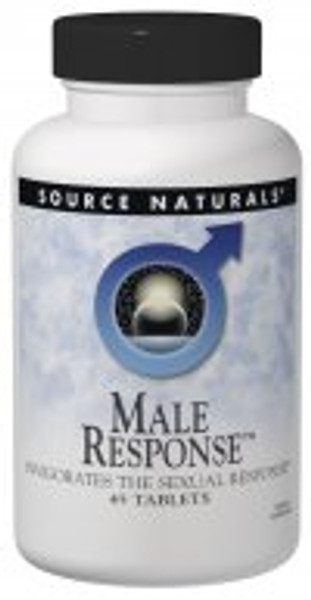 Invigorates the Sexual Response
Male Response™ invigorates the sexual response while helping to support the health of the prostate gland, revitalizing energy levels, and nourishing the adrenals.

Horny Goat Weed (Epimedium) is a time-tested aphrodisiac that increases libido in men and women, and improves erectile function in men. It has long been employed to restore sexual fire, boost erectile function, allay fatigue and alleviate menopausal discomfort. Horny Goat Weed enhances blood flow through an increase in nitric oxide to improve erections and performance .
Tribulus is now most often used as a dietary supplement based on claims that it can boost libido and testosterone. Therefore, using a tribulus supplement may benefit energy levels, muscle size, strength, libido and sexual function.
It helps increase energy and stamina and has been shown to help reduce cholesterol and blood pressure. It also helps increase levels of testosterone safely.
Most people associate Ginkgo Biloba with mental clarity, improved memory, and focus. However, more than 300 studies have been done on Gingko Biloba, with many indicating that it can have a significant and positive impact on sexual function, too. In one study Gingko Biloba generally improved all 4 phases of sexual response including (1) desire, (2) excitement, (3) orgasm, and (4) afterglow. It has also been well documented in various medical journals that Gingko Biloba improves microvascular circulation (i.e. blood flow to small blood vessels and capillaries), potentially improving erectile function. And it may help to relax muscles of the Corpus Cavernosum via its effects on the nitric oxide pathways. Again, resulting in increased blood flow to the penile tissues for stronger, harder erections.

Panax Ginseng has been used in traditional Chinese medicine for thousands of years as an aphrodisiac, noted for improving sexual function, endurance, and stamina.Studies have noted that it may improve nitric oxide synthesis in the corpus cavernosum – thus, increasing blood flow to the penile tissues and resulting in firmer erections.

Asian Red Ginseng. has been clinically proven to improve erections. In a study done on men (not animals as is usual) results showed that the erectile function scores of men who were treated with the ginseng were significantly higher than those who received the placebo.

Damiana widens blood vessels in the penis which increases both drive and responsiveness. Damiana has been used by men as an aphrodisiac for thousands of years earning a reputation for increasing sexual endurance, improving erection quality, and stimulating more intense and satisfying orgasms. And now clinical studies are beginning to support what the native people of Central and South America have known for centuries.

Saw Palmetto Berry is good for prostate health and helps intensify orgasms. It has long had a reputation as a sexual stimulant and aphrodisiac.
Suggested Use: 1 to 3 tablets with a meal, up to 5 tablets per day. Do not exceed 5 tablets per day. Best if taken daily for 10 weeks with a 1 week break before resuming.
Other Ingredients: sorbitol, stearic acid, modified cellulose gum, and silica.
Warning: Contains yohimbine. Do not use this product if you are at risk of or are being treated for high blood pressure, heart or prostate conditions, kidney disease or any other medical condition. Not for use in geriatric or psychiatric patients or children. Do not use with antidepressants. Consult your health care professional if you are taking any prescription drug. If nervousness, tremors, irritability, or dizziness occur, discontinue use and consult your health care professional.
Do not use if either tamper-evident seal is broken or missing. Keep out of the reach of children.
Contains soy.
*These statements have not been evaluated by the FDA. This product is not intended to diagnose, cure or prevent any disease.