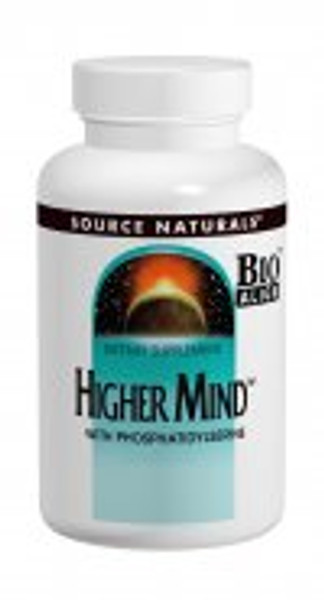 Higher Mind 60 Tablets
With Phosphatidylserine
Higher Mind addresses the multiple, interdependent body systems necessary for healthy brain function: neurotransmitter production, cell membrane stability, energy generation, antioxidant defense and myelin sheath generation. This Bio-Aligned Formula features phosphatidyl serine, a phospholipid that is an essential component of nerve cell membranes. These membranes conduct electrical impulses that promote communication between nerve cells, contributing to healthy cognitive function.*
Acetyl-L-Carnitine (ALC) is a naturally occurring form of L-Carnitine, a vitamin-like nutrient synthesized in the body from the amino acids lysine and methionine. ALC plays a key role in the production of acetylcholine, an important neurotransmitter for brain and nerve cell function.
Bacopa Leaf Extract is used to promote healthy mental functions, including intellectual capacity and memory. Studies indicate significant improvements in learning rate, state of anxiety, depression, mental fatigue, and memory span.
DMAE is a precursor to choline, an important nutrient that is often associated with the B-vitamin group. Choline is used by the body for many important functions, which include cell membrane integrity and the healthy functioning of neurotransmitters known as acetylcholines. According to studies, both DMAE and choline are linked to evidence that they promote optimal functioning of memory and also enhance learning abilities.
GABA is an amino acid and the major inhibitory neurotransmitter in the brain. It inhibits the transmissions of nerve impulses and maintains a balance in the brain between excitation and inhibition, acting as a calming agent.

Ginkgo Biloba has been used for centuries in the Orient for complaints associated with aging. Ginkgo Biloba appears to increase cerebral blood flow and thus help oxygenation, inhibits platelet aggregation, and can reduce symptoms of vertigo, memory loss, tinnitus, and headache.

L-Huperzine A is a natural compound extracted from the Huperzia serrata plant. L-Huperzine A is used to improve memory, learning and perhaps mood. Some people have also reported an improvement in dream activity.

L-Phenylalanine is an essential amino acid which can be converted to L-tyrosine by a complex biochemical process which takes place in the liver. L-tyrosine can be converted by neurons in the brain and in the adrenal medulla of the adrenal glands to dopamine, norepinephrine (noradrenaline), and epinephrine hormones which are depleted by stress, overwork, and certain drugs.
Phosphatidylserine is essential for all cells in the body, but it's concentrated in the brain where it aids brain cell function.  PS is a phospholipid extracted from soy beans that has been shown to have significant memory enhancement effects.  It is a vital component of all healthy brain cell membranes.  It assists in membrane transfer of nutrients and promotes nerve transmitter release and synaptic activity to support mental clarity.
Other Ingredients: silicified microcrystalline cellulose, colloidal silicon dioxide, hydroxypropyl methylcellulose, magnesium stearate, and stearic acid.
Warning: Contains phenylalanine and tyrosine. Not to be used by phenylketonurics, women who are pregnant, may become pregnant, breastfeeding, or with antidepressant drugs containing MAO or SSR inhibitors. If you have chronic high blood pressure or epilepsy, consult your health care professional before using this product.
Do not use this product: Within 7 days before or after surgery; or after any physical injury or trauma; or if you are taking warfarin (Coumadin(R)), aspirin, NSAID's, or any other anticoagulant or antiplatelet aggregation drug; or if you have diabetes; or if you have a history of bleeding, high or low blood pressure, stroke or heart disease; or if you are pregnant or nursing a baby.
Discontinue use and notify your physician immediately if any unusual bleeding or symptoms occur. Signs and symptoms of bleeding include: pain, swelling or discomfort, prolonged bleeding from cuts, increased menstrual flow or vaginal bleeding, nosebleeds, bleeding of gums from brushing, unusual bleeding or bruising, red or dark brown urine, red or tar black stools, headache, dizziness, or weakness.
Do not use if either tamper-evident seal is broken or missing. Keep out of the reach of children.
Contains soy.
*This statement has not been evaluated by the Food and Drug Administration. This product is not intended to diagnose, treat, cure or prevent any disease.