Benfotiamine, a derivative of vitamin B-1, has been used to alleviate diabetic complications, including neuropathy, retinopathy and nephropathy. It helpssupport healthy blood sugar metabolism and helps protect the body’s tissues against advanced glycation end products and oxidative stress.

Benfotiamine (S-benzoylthiamine-O-monophosphate) is a synthetic derivative of thiamin, belonging to the family of compounds knows as "allithiamines." Benfotiamine is fat-soluble and more bioavailable and physiologically active than thiamin.* Benfotiamine raises the blood level of thiamin pyrophosphate (TPP), the biologically active co-enzyme of thiamin, and stimulates transketolase, a cellular enzyme essential for maintenance of normal glucose metabolic pathways.
Benfotiamine (S-benzoylthiamine-O-monophosphate) is a synthetic derivative of thiamin,belonging to the family of compounds known as "allithiamines." Benfotiamine is fat-soluble and thus more bioavailable and physiologically active than thiamin.* Characteristic of the allithiamines is an open thiazole ring within the chemical structure of these thiamine-related compounds, making them fat (lipid) soluble. In contrast, thiamine, which is water soluble, has a closed thiazole ring. The lipid solubility of benfotiamine, conferred by this open ring, increases its bioavailablity.
Benfotiamine is readily absorbed at higher doses, in contrast to absorption of water-soluble thiamin salts, which decreases at higher doses, due to saturation of absorption sites in the intestines.1 In a double-blind, cross-over trial, comparing bioavailability of benfotiamine to that of thiamine in 12 subjects, benfotiamine caused an average 5-fold greater increase in blood thiamine levels than thiamin mononitrate, with a concomitant greater thiamine concentration in erythrocytes (red blood cells).2 Benfotiamine readily passes through intestinal mucosal cells, where it is converted into physiologically active thiamine. Benfotiamine inceases blood levels of thiamine pyrophosphate (TPP), the primary thiamin co-enzyme.3
*More information below supplement facts* 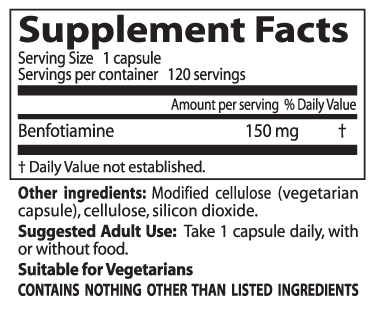 Benfotiamine has an excellent tolerability profile and can be taken for long periods without adverse effects.3,12

Benfotiamine Raises the Blood Level of Thiamine Pyrophosphate (TPP), the Biologically Active Co-enzyme of Thiamine.4*
Thiamine and its Co-enzyme, TPP

Thiamine (vitamin B1) plays an essential part in the metabolism of glucose, through actions of it co-enzyme TPP (thiamine pyrophosphate). TPP is formed by the enzymatically-catalyzed addition of two phosphate groups donated by ATP to thiamine. TPP also goes by the name "thiamine diphosphate." In the cytoplasm of the cell, glucose, a 6-carbon sugar, is metabolized to pyruvic acid, which is converted into acetyl-CoA, otherwise known as "active acetate." Acetyl CoA enters the mitochondrion, where it serves as the starting substrate in the Kreb’s cycle (citric acid cycle). The Krebs cycle is the primary source of cellular metabolic energy. TPP, along with other co-enzymes, is essential for the removal of CO2 from pyruvic acid, which in turn is a key step in the conversion of pyruvic acid to acetyl CoA. CO2 removal from pyruvic acid is called "oxidative decarboxylation," and for this reason, TPP was originally referred to as "cocarboxylase." TPP is thus vital to the cell’s energy supply.

Acting as a biochemical "super-thiamin," it does this through several different cellular mechanisms, as discussed below.

As long as glucose remains at normal levels, excess glucose metabolites do not accumulate within the cell. The bulk of the cell’s glucose supply is converted to pyruvic acid, which serves as substrate for production of acetyl CoA, the primary fuel for the Krebs cycle. Of the total amount of metabolic energy (in the form of ATP) released from food, the Krebs cycle generates about 90 percent.5 In the presence of elevated glucose levels, the electron transport chain, the final ATP-generating system in the mitochondrion, produces larger than normal amounts of the oxygen free radical "superoxide." This excess superoxide inhibits glyceraldehyde phosphate dehydrogenase (GAPDH), a key enzyme in the conversion of glucose to pyruvic acid, resulting in an excess of intermediate metabolites known as "triosephosphates." Increase triosephophate levels trigger several cellular mechanisms that result in potential damage to vascular tissue. Cells particularly vulnerable to this biochemical dysfunction are found in the retina, kidneys and nerves.

Benfotiamine has been shown to block three of these mechanisms: the hexosamine pathway, the diaglycerol-protein kinase C pathway and the formation of Advanced Glycation End-poducts. As discussed below, benfotiamine does this by activating transketolase, a key thiamin-dependent enzyme.6

Transketolase diverts the excess fructose-6-phosphate and glyceraldehyde-3-phosphate, (formed by the inhibition of GAPDH, as mentioned above), into production of pentose-5-phosphates and erythrose-4-phosphate and away from the damaging pathways. Benfotiamine activates transketolase activity in bovine aortic endothelial cells incubated in glucose.6 To test benfotiamine’s ability to counteract these metabolic abnormalities caused by elevated blood glucose, studies have been done in diabetic rats. Benfotiamine increases transketolase activity in the retinas of diabetic rats, while concomitantly decreasing hexosamine pathway activity, protein kinase C activity and AGE formation.6

AGE formation on the collagen in coronary arteries causes increased vascular permeability. This vessel "leakiness" allows for abnormal cross-linking between plasma proteins and other proteins in the vessel wall, compromising vascular function and potentially occluding the vessel lumen. A number of other potentially harmful events may also occur, including production of cytokines that further increase vascular permeability. Endothelin-1, a strong vasoconstrictor, is over produced, increasing the possibility of thrombosis and generation of oxygen free radicals is stimulated.8

It is vitally important to support normal glucose metabolic pathways so that formation of AGEs is minimized. Benfotiamine, in the test tube (in vitro) prevents AGE formation in endothelial cells cultured in high glucose by decreasing the glucose metabolites that produce AGEs.9 Endothelial cells make up the membranes that line the inner walls of organs and blood vessels. In a rat study comparing the effects of Benfotiamine with water-soluble thiamin, Benfotiamine inhibited AGE formation in diabetic rats while completely preventing formation of "glycooxidation products," which are toxic by products of chronic elevated blood glucose. AGE levels were not significantly altered by thiamin.10 Benfotiamine also normalized nerve function in the animals. After three months of administration, "nerve conduction velocity (NCV)," a measure of nerve function, was increased by both benfotiamine and thiamin; at six months, NCV was normalized by benfotiamine, whereas thiamin produced no further increases in this parameter.

Dysfunctional glucose metabolic pathways leading to AGE formation occurs in endothelial cells of the kidneys. In a recent animal study, benfotiamine was administered to rats with elevated glucose levels. Benfotiamine increased transketolase activity in the kidney filtration system of these rats, while at the same time shifting triosephophates into the pentose pathway and preventing protein leakage.11