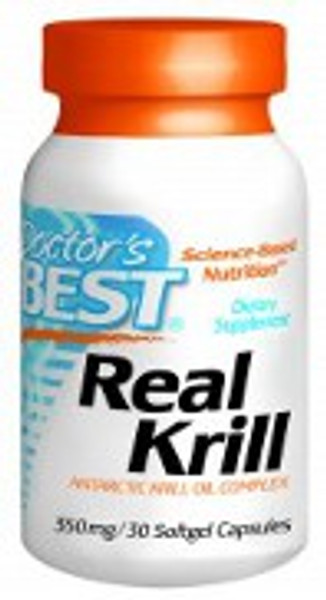 This is a 100 percent authentic product from sustainably harvested Antarctic Krill. It provides omega-3 EPA and DHA linked into phospholipids, together with the versatile protective carotenoid astaxanthin. These nutrients are vital lipids, building blocks for the cell membrane systems that manage most of the important life functions. Real Krill provides them in molecular forms that have superior functionality over fish oils.

Real Krill is a 100 percent authentic dietary supplement, a lipid nutrient complex sustainably harvested from the Antarctic Krill, Euphausia superba. Krill are shrimp-like ocean creatures (Crustaceans) that feed exclusively on algae, the primary producers in the marine food chain. Antarctic krill are so abundant they could be the largest single species mass on the planet.1

Krill thrive in the frigid Antarctic seas due to their ample content of the long-chain omega-3 fatty acids DHA (DocosaHexaenoic Acid) and EPA (EicosaPentaenoic Acid). By remaining fluid at temperatures way below freezing, these vital lipid nutrients assist krill to routinely survive, feed and reproduce.
How to Use Real Krill

Each softgel capsule of this breakthrough dietary supplement provides 350 mg of highest-grade Antarctic krill oil complex. As maintenance intake, take 1 softgel daily with a small meal. To support healthy mood management, take 2-3 softgels per day. To support healthy blood lipid management and joint health, take 3 softgels per day. This supplement is not vegetarian and may not be suitable for individuals with seafood allergies. 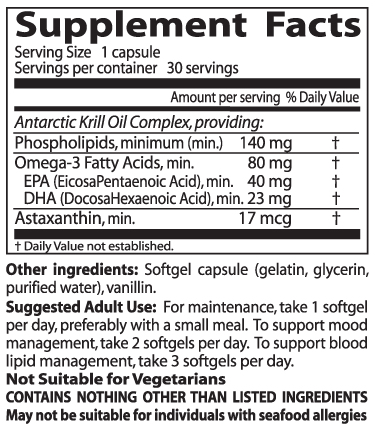 Krill oil is sometimes compared to fish oil as an omega-3 dietary supplement. But authentic krill oil complex contains a greater range of nutrients, and its benefits far exceed those of fish oils. Most of the DHA and EPA of krill oil occurs linked into larger phospholipid molecules (pronounced fos-fo-lip-ids).2 These are preformed building blocks for the cell membranes that drive life processes. In fish oil, by contrast, all the DHA and EPA occurs as triglycerides, which are storage forms of fatty acids (“fat”). The DHA and EPA has to be removed from the triglycerides, then linked into phospholipids prior to inserting them into cell membranes.

In a large proportion of women, premenstrual problems affect life quality by negatively affecting mood and other mental state and by generating pain and other physical problems. In a double blind trial, krill oil was compared against fish oil for the relief of ten well recognized premenstrual complaints.4 Seventy (70) women of childbearing age consumed 2 grams of either a krill oil or a fish oil, daily for the first month. Then for the next 2 months, they took the assigned supplements for just eight days prior to menstruation and another 2 days subsequent. They filled in detailed questionnaires and kept track of their daily analgesic (painkiller) medication use.

After the first 45 days the women taking krill oil had significant improvements in all 10 complaints, including irritability, depression, stress, and “feelings of being overwhelmed.”4 The physical complaints that improved included breast tenderness, joint pain, weight gain, abdominal pain, swelling, and bloating. Those taking fish oil reported improvements in just 2 physical complaints—weight gain and abdominal pain. From day 45 to day 90 all the krill oil benefits were sustained while for the fish oil group only relief of swelling was added.

The superior benefits from krill oil also showed in the women’s lowered reliance on painkillers.4 By day 90, those receiving krill oil were able to reduce their daily consumption of ibuprofen or acetaminophen by more than half. Those receiving fish oil reduced ibuprofen by 33 percent and acetaminophen by 41 percent. The women taking krill oil also avoided the unpleasant reflux regurgitation experienced by two-thirds of the women who took the fish oil.

Blood lipid abnormalities including elevated LDL cholesterol and total cholesterol, reduced HDL cholesterol, and high triglycerides, are proven risk factors for cardiovascular disease5 and are also linked to premature memory decline.6 In a randomized clinical trial, 120 men and women with hyperlipidemia (abnormally high total cholesterol and triglyceride levels) received either krill oil, fish oil or a placebo for 90 days.7 The krill oil dosages ranged from 1-3 grams per day and were tailored to body mass index (BMI); the fish oil dosage was 3 grams per day. The trial went for 90 days.

Support for Joint Health and Lowering of CRP

In a double blind trial, 90 subjects with severe joint complaints and/or cardiovascular problems were randomized to receive either krill oil (300 mg per day) or a placebo.8 They were assessed at baseline, then after 7, 14 and 30 days. They were allowed to use only acetaminophen for pain. Already at day 7, krill oil significantly improved joint pain (by 29 percent), stiffness (by 20 percent), and functional impairment (by 30 percent). By day 30, pain was down by 38 percent in the krill group, stiffness was 39 percent improved, and function was 36 percent improved, versus no improvement in the placebo group. The subjects receiving krill were able to lower their acetaminophen intake by 32 percent, while those on placebo reduced theirs significantly less (6 percent).

Another finding from this trial was that krill oil significantly reduced CRP.8 This blood protein is a useful marker for inflammatory activity occurring virtually anywhere in the body. Ongoing inflammation is a risk factor for poor health, wherever it occurs, in the gums for example.9 Best measured by an inexpensive test called “highly sensitive CRP” test (hsCRP), elevated CRP is a strong predictor of future risk for cardiovascular or brain “adverse events.”10 Assessing cardiovascular risk via CRP testing is a useful complement to cholesterol testing, especially since cholesterol assessment falls far short of predicting all cardiovascular risk.11

In this trial krill oil reduced CRP by 19 percent at day 7, compared to a 16 percent increase in the placebo group.8 The increase in the placebo subjects likely was related to their being taken off their anti-inflammatory medications (except for acetaminophen). At day 30 CRP was reduced by 31 percent in the krill group but was increased by 25 percent in the placebo group. The ability to lower CRP is a valuable contribution of krill oil to healthy immunity and cardiovascular function, and therefore to health overall.

Every cell has a membrane system that performs most of the necessary life processes.12 Membranes are thin, interconnecting molecular sheets that define the cell’s outer border and extend into the cell interior. The membrane’s foundation or matrix consists mostly of phospholipids with fatty acids attached (DHA and EPA, for example). Numerous catalytic proteins are inserted into this matrix, and these must be free to move, which requires the matrix be semi-fluid. The omega-3 phospholipids of krill provide this natural fluidizing effect.

For humans as well as for krill, omega-3 phospholipids are natural cell membrane fluidizers. They also drive metabolism: since fluidity facilitates the membrane proteins, the higher the omega-3 phospholipid content in a membrane the higher its metabolic activity.13 PhosphatidylCholine (PC) is the most common phospholipid in all human cells,12 and krill oil complex is an excellent dietary source of omega-3 PC carrying DHA and EPA.

Fish stocks worldwide are threatened with depletion, due to unsustainable fishing practices.14 Krill stocks are not. A visionary international cooperation begun in 1982 continues to ensure that Antarctic krill harvesting remains sustainable. In that year the CCAMLR, the Convention on the Conservation of Antarctic Marine Living Resources, was founded as a multinational organization to exclusively set and regulate “precautionary” catch quotas for the krill and other Antarctic fisheries.15

Fish oils are a popular dietary supplement category, yet they do not predictably improve cholesterol management7 or lower CRP,16 nor do they consistently benefit mood management as seen in the premenstrual trial.4 Krill oil provides a broader spectrum of benefits than does fish oil, and at much lower daily intakes.

Cell membranes are fundamental to life processes, and Real Krill is a cell membrane supplement remarkable for its superior support of the brain,4 circulation,7 immune system,8 joints,8 heart,17 and liver,17,18 and for health and wellbeing overall.