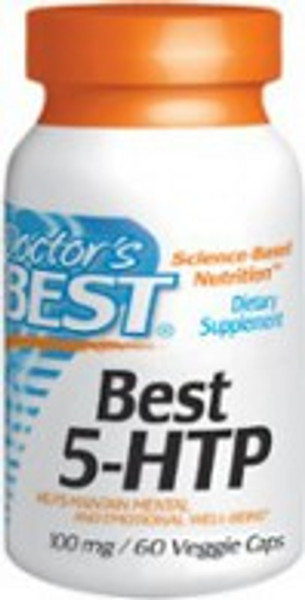 Oxitriptan, or 5-hydroxytryptophan (5-HTP) is the less well known cousin of Tryptophan, the amino-acid precursor of Serotonin. However, clinical studies show that it's far more efficient at increasing brain Serotonin than Tryptophan. Serotonin is a key brain neurotransmitter involved in mood regulation (anti-anxiety, antidepressant), impulse control (aggression, obsessive compulsive disorders, pain control and sleep). It has been shown to increase brain Dopamine and Noradevenalin activity. These are two key mood and alertness regulating neurotransmitters. *

Caution: Not to be used when taking MAO inhibitors, selective serotonin reuptake inhibitors (SSRIs), or other anti-depressant medications. It should also not be used by individuals taking any of the category of medications known as "triptans". Keep out of reach of children.

Note: Best 5-HTP is tested to ensure that it does not contain "Peak X"

Contains nothing other than listed ingredients

Oral administration of 5-HTP in clinical studies has resulted in gastrointestinal disturbances such as nausea, vomiting and diarrhea. According to a review of several studies, these effects are tolerated by most patients and tend to lessen over time. Side effects are more marked with higher doses.5 A recent review in a toxicology journal concludes that while undue speculation was raised years ago, “there is no evidence to implement its intake as a cause of any illness.”16

5-HTP functions as the precursor for serotonin, a monoamine neurotransmitter found in the central nervous system (CNS) and some cells of the digestive tract. In the body, 5-HTP is formed by the addition of a hydroxyl group (–OH) to tryptophan, a reaction catalyzed by the enzyme tryptophan hydroxylase. This enzyme can be hindered by stress and conditions such as vitamin B6 deficiency, which is one reason B6 is included in this formula. Additionally, pyridoxal phosphate (vitamin B6) is necessary for it to be converted to serotonin. Vitamin C participates in the conversion of tryptophan to 5-HTP and of tyrosine to norepinephrine, another important neurotransmitter.

Synthesis of serotonin in the brain requires an adequate supply of either tryptophan or 5-HTP as precursors in the CNS. The supply of tryptophan available for conversion to 5-HTP depends on a number of factors, including the nutritional status of the individual and the competition between tryptophan and other amino acids for transport across the blood-brain barrier. Where as tryptophan may be sidetracked into the production of niacin or protein, it readily crosses the blood-brain barrier and becomes available for serotonin synthesis. Therefore, supplementation with it is a more direct route to serotonin production.1

In contrast to tryptophan, orally consumed 5-HTP is readily absorbed by the mucosal cells of the gastrointestinal tract, with up to 70% then appearing in the bloodstream.2 The implications of possibly altering serotonin in this manner are significant: serotonergic neurons (nerve cells stimulated by serotonin) regulate sleep, appetite, nociception (the perception of pain), and aggressive behavior.

A synaptic serotonin deficit is hypothesized to be capable of a major adverse effect on mood.3 Supplementation with 5-HTP therefore is believed to balance mood via an increase in serotonin synthesis. This was researched extensively upon discovery that it could be used to alter serotonin levels in rats. In a pilot study on humans, the subjects receiving 5-HTP showed a 35% increase on a mood rating scale, whereas the placebo group showed a 6% decrease.4

A comprehensive review of seven open and seven controlled clinical studies found that oral consumption of 5-HTP improved mental and emotional status in 60 to 70 percent of subjects.5 The results varied from "modest" to "marked."  Dosages ranged from 50 to 300 mg daily.

In a study of 134 recently bereaved men, mood was assessed using the Profile of Mood States (POMS) questionnaire. Men in this study who had adequate pyridoxine (vitamin B6) status had significantly better total mood disturbance (TMD) and confusion-bewilderment subscale scores. Additionally, pyridoxine deficiency was specifically related to a fatigued mood.6

Promotes calming down and relaxing*

In a study of 32 healthy adults, half of the subjects were given 200 mg of 5-HTP, and the other half given placebo. All of the subjects were then given a stress-inducing substance (CCK-4) to provoke tension and elicit nervous irritability. In the female subjects who took the supplement, there was a significant reduction in the rate and intensity of the negative cognitive reaction.7 This research built on previous studies where administration of 5-HTP produced a calming effect in subjects prone to nervous irritability.

An exciting area of research recently regaining attention is the relationship between serotonin and appetite—and therefore its potential to aid in the maintenance of a healthy weight. While serotonin is renown for its function in the brain, 95% of serotonin is actually found in the gastrointestinal tract. Accordingly, serotonin is deeply involved in gut physiology, including visceral perception and weight maintenance.8 In research where 5-HTP was administered at higher doses, it was discovered that these high doses of 5-HTP produced weight loss in subjects, mainly through its influence on satiety and an altered appetite for specific macronutrients.

An animal study took experimental use of 5-HTP a step further by investigating food deprivation and also stress-induced eating. Although the 5-HTP was injected rather than orally administered in the rats, results clearly showed that administration of 5-HTP suppressed eating compared to placebo treatment in food-deprived rats and even more so in rats undergoing stress.12

May improve quality of sleep*

Studies have shown that it influences the quality of sleep by increasing REM (rapid eye movement) sleep. Administration of as little as 200 mg of 5-HTP in the evening prior to bedtime has been shown to increase the duration of REM sleep from 5 to 53% and decrease the amount of non-REM sleep.13

Compounds such as vitamin E and flavonoids derive their free-radical quenching ability from their hydroxyl groups (–OH), which donate electrons to oxidants. 5-HTP is formed from tryptophan by the addition of an –OH group, which gives 5-HTP its antioxidant properties. This is in contrast to tryptophan, which is sensitive to oxidation. The effectiveness of 5-HTP in preventing lipid and protein oxidation is believed to contribute to liver cell integrity by countering membrane rigidity.14 A recent laboratory test demonstrated that it is a more effective hydroxyl radical scavenger than even vitamin C.15

Scientific References
*This statement has not been evaluated by the Food and Drug Administration. This product is not intended to diagnose, treat, cure or prevent any disease.