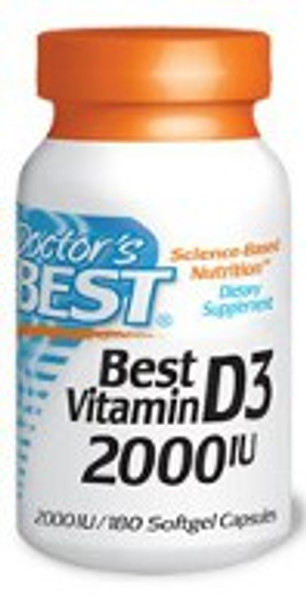 Vitamin D is a nutrient that is critical to many bodily functions. It is beneficial for supporting bone health, immune wellness, cardiovascular function, and cellular metabolism.* Mounting research is highlighting the ever-increasing benefits of optimal vitamin D status.* Scientific studies have demonstrated that vitamin D levels are often low in the general population.The standard assessment for vitamin D levels is measuring the level of the marker 25(OH) D3 in the blood. Researchers suggest that levels between 50 and 80 ng/mL are optimal for supporting health.1

Vitamin D is essential for life. It regulates calcium homeostasis in the human body, which is of vital importance as calcium is involved in the function of all cells. Calcium balance is also essential for bone growth and formation, as well as for the function of the nervous system. It has been shown in multiple studies to support healthy bone structure.However,over the last several years,more and more research has focused on other critical functions of this hormone-like vitamin. It plays a role in most organs and systems of the body. Like other hormones, vitamin D acts as a molecular switch by influencing the expression of multiple genes.1 Thus, activated vitamin D not only influences bone health, but is involved in supporting the function of the immune system, cardiovascular system, respiratory system and the musculoskeletal system, among others.

*More information below supplement facts*
Suggested Use: Take one or two capsules daily or as directed by a nutritionally informed physician.
Other Ingredients: Extra virgin olive oil, softgel capsule (gelatin, glycerin, purified water).
The Vitamin D3 contained in this product is derived from lanolin, a component of sheep's wool.

Not Suitable for vegetarians

Contains nothing other than listed ingredients
Added to the knowledge of how vitamin D can affect the function of various organs throughout the human body is research showing that a majority of individuals are not getting optimal levels of this crucial supervitamin on a daily basis, placing them at risk for deficiencies.

While we obtain some vitamin D from our diet, the major source for replenishment of vitamin D levels is exposure of the skin to sunlight. Adequate daily sun exposure is considered to be sufficient to fulfill the human requirement for vitamin D. However, a number of factors affect our ability to refresh our vitamin D supplies. First, due to the climate we live in, sun exposure is not always possible year-round. This is the case especially in northern latitudes and much of the northern United States. Second, direct sunlight exposure on the skin is needed for its production to occur. Covering skin with sunscreens and other topical products prevents the necessary exposure from occurring. Skin color is also a factor when it comes to adequate vitamin D production.
Individuals with darker skin require longer sun exposure than individuals with lighter skin to produce the same amount of vitamin D. Furthermore, UV rays from the sun do not penetrate indoors through windows. Since UV light is required for its synthesis in skin, being indoors leads to no production of vitamin -D. For one or more of these reasons, we often fail to meet our vitamin D requirements for health.

The second common source of vitamin D is from dietary intake. However, few foods are naturally high in vitamin D, with fish and seafood being the richest source.2 Adequate intake levels for vitamin D have been established by the Food and Nutrition Board (FNB) at the Institute of Medicine of The National Academies. For adults between 19 and 50 years of age, the FNB advises an intake of 200 IU per day, while for individuals aged 51 to 70 years, an intake of 400 IU per day is recommended. Recent studies have shown that these levels are often woefully inadequate for assuring optimal vitamin D status and for achieving the health benefits associated with adequate vitamin D levels. Some researchers suggest that a minimum daily intake of 1,000 IU is necessary to maintain barely adequate blood levels of vitamin D.3 Others agree that significantly higher doses are needed to ensure levels are optimal enough to promote health.1
Vitamin D toxicity is extremely rare. In order to reach toxic levels, most adults would have to consume 10,000 IU or more per day for many months or years. Vitamin D3 (cholecalciferol, the form found naturally in animals and humans) toxicity has rarely been reported in the literature. Most reports of vitamin D toxicity have been attributed to faulty production, labeling and dosing errors or to the use of vitamin D2 (ergocalciferol).1 When used in the amounts recommended, vitamin D3 is very safe.
Vitamin D from dietary intake or sun exposure requires two activation steps in the body. The first activation occurs in the liver, while the second activation occurs in the kidneys, allowing for regulation of calcium metabolism. However, vitamin D receptors are present throughout the body, in tissue such as the skin, cartilage, heart, prostate, bones and intestines. Thus, the second activation step also takes place in local tissues. Recent discoveries have highlighted the important modulatory effects of vitamin D on various cells of the immune system.

Research has uncovered the role vitamin D plays in supporting cardiac function. Heart myocytes (cells) express the vitamin D receptor, as do smooth muscle cells of blood vessels. The benefits of vitamin D on the heart are potentially far-reaching. Studies on mice heart cells have shown that vitamin D administration impacts their growth and proliferation. In these cells, vitamin D inhibited the release of a protein that could be detrimental to the function of these cells, displaying cardioprotective properties. It has also been shown that vitamin D has a modulatory effect on heart rhythm. Again, in mouse heart cells, knocking out the effects of the vitamin D receptors led to an increased rate of contraction and relaxation. In normal mouse cardiac myocytes, administration of vitamin D led to normalization of heart contractility. Further studies in mice have led researchers to conclude that vitamin D supports the overall structure and function of the heart in terms of shape, size and performance.5

Studies in humans have confirmed the importance of vitamin D for heart function. In a study consisting of 1,739 participants from the Framingham Offspring Study, those individuals with the highest levels of vitamin D had superior cardiac function in relation to those with low vitamin D levels.5 These results make sense when taken in context of the overall effects of low vitamin D. These effects include an imbalance in the immune production of inflammatory markers, disturbing the normal inflammatory response and leading to potential effects on all tissues, including the heart and blood vessels. Restoration of optimal vitamin D status supports a healthy, normal inflammatory response and may thus restore the optimal health of the heart and cardiovascular system.

The role of vitamin D for bone health (alongside that of calcium) has been well-characterized in published literature. Vitamin D is obviously required for optimal calcium absorption. Recent studies have shown that possibly a majority of women with bone health issues have low levels of vitamin D. In some studies, this number is well over 60%. One such study found that out of a total of 2,606 postmenopausal women assessed, more than 64% had levels of vitamin D of less than 30 ng/mL (measured as serum levels of 25(OH) D, a common blood measure of vitamin D sufficiency). These authors state that, according to a recent review article, the optimal vitamin D levels as measured by 25(OH) D are between 50 and 80 ng/mL.8 Thus, levels near 30 ng/mL are significantly below those considered optimal.

An interesting study was performed recently in Finland in which 212 adolescent females were divided into three groups a placebo group receiving no vitamin D, a low-dose vitamin D group (200 IU per day) and a higher dose vitamin D group (400 IU per day). The study aimed to measure the effects of vitamin D intake on bone mineral density in these young healthy females who also had adequate calcium status. At the end of the one year study, both vitamin D groups had significant improvements in bone density measured at the femur bone, whereas the 400 IU group also had significantly higher mineral density at the lumbar spine.9 These findings indicate the importance of vitamin D in bone structure and formation and also indicate the role of vitamin D in bone health independent of calcium intake.

Given its role as a promoter of gene expression, vitamin D affects numerous systems throughout the body. Research unmistakably shows that vitamin D is also a regulator of cellular health and wellness. Aged, unhealthy cells tend to lose their ability to differentiate and perform their original intended function due to the cumulative effects of oxidative damage. Vitamin D, acting as a pro-hormone, promotes the ability of cells to maintain their normal life cycle of birth, differentiation, functional performance and death, when they have become overly damaged.10 Damaged cells can lead to damaged tissue function. By promoting the normal cell cycle, vitamin D ensures the progression of cells through their functionality and their healthy renewal.