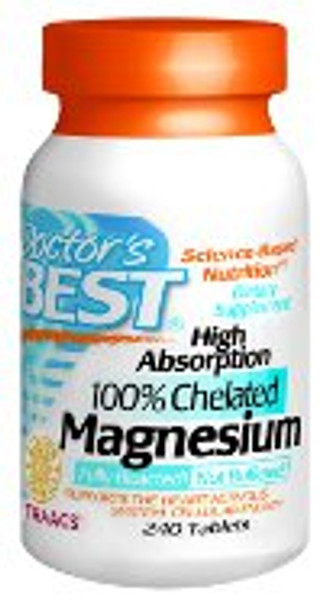 What Can Magnesium Help Me With?*

•  Support the body's ability to properly dissolve and utilize calcium in

•  Support healthy hormonal balance—especially in connection with the

contains elemental magnesium chelated with the amino acids glycine and lysine. As an essential dietary mineral, magnesium plays important roles which include: helping cells produce metabolic energy, supporting optimum nerve function, helping muscles relax properly and maintaining a healthy heartbeat. Glycine has been shown to be an efficient carrier for minerals that facilitate absorption in the intestine tract. Glycine is used by the body to form collagen, a key protein in cartilage and connective tissue. Lysine is an essential amino acid that assists gastric function. 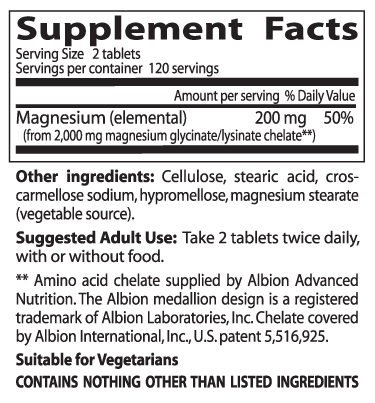 An abundance of data collected from the last three decades shows a consistent pattern of low magnesium intake in a majority of the U.S. population, with estimates running as high as 75% of Americans not meeting the recommended dietary allowance Loss of magnesium during food processing and low magnesium content in commonly eaten foods serve as partial explanations for this lack of adequate dietary magnesium.  3, 4

Magnesium – Important for Everyone, Deficient in Many

The current RDA, 350 mg. per day, is considered to be sufficient but there is mounting evidence that this figure is lower than optimal intake and that this low level of magnesium contributes to all of the listed degenerative diseases. Until a better way is devised to determine optimal total body magnesium (TBM) consider supplementation and watch for results.

Of particular note, magnesium intake tends to decrease with age. The elderly may be susceptible to magnesium deficiency for a variety of reasons, including inadequate magnesium intake, poor absorption due to impaired gastrointestinal function, and use of drugs such as diuretics that deplete magnesium from the body.5 It has been theorized that magnesium deficiency may contribute to accelerated aging through effects on the cardiovascular and nervous systems, as well as on muscles and the kidneys.6
Women who take both synthetic estrogen and calcium supplements may be at risk for low blood levels of magnesium.7 Estrogen promotes the transfer of magnesium from blood to soft tissues. Low blood magnesium may result if the ratio of calcium to magnesium intake exceeds 4 to 1. Magnesium supplementation is thus advisable for women taking estrogen and calcium.

Magnesium has been consistently depleted in our soils. It has been further depleted in plants by the use of potassium and phosphorus laden fertilizers which alter the plant's ability to uptake magnesium. Water from deep wells supplies additional magnesium not found in food, but surface water, our common source of supply, lacks magnesium. Food processing removes magnesium. Broiling, steaming and boiling remove magnesium into the water or drippings. High carbohydrate and high fat diets increase the need for magnesium as does physical and mental stress. Diuretic medications and insulin further deplete total body magnesium. As we age magnesium uptake may be impaired. Dieting reduces intake of already low levels of magnesium intake.

Recent research, in France and several other European countries, gives a clue concerning the role of magnesium plays in the transmission of hormones (such as insulin, thyroid, estrogen, testosterone, DHEA, etc.), neurotransmitters (such as dopamine, catecholamines, serotonin, GABA, etc.), and minerals and mineral electrolytes.

Magnesium protects the cell from aluminum, mercury, lead, cadmium, beryllium and nickel. Evidence is mounting that low levels of magnesium contribute to the heavy metal deposition in the brain that precedes Parkinson's, multiple sclerosis and Alzheimer's. It is probable that low total body magnesium contributes to heavy metal toxicity in children and is a participant in the etiology of learning disorders.

The average adult body contains anywhere from about 21 to 28 grams of magnesium. Approximately 60 percent of the body’s magnesium supply is stored in bone. Soft tissue, such as skeletal muscle, contains 38%, leaving only about 1–2% of the total body magnesium content in blood plasma and red blood cells. Magnesium in the body may be bound either to proteins or anions (negatively charged substances). About 55% of the body’s magnesium content is in the ionic form, which means it carries an electrical charge. Magnesium ions are cations, ions that carry a positive charge. In its charged state, magnesium functions as one of the mineral electrolytes.

Magnesium works as a co-factor for over 300 enzymatic reactions in the body. Metabolism uses a phosphate-containing molecule called ATP as its energy source. Magnesium is required for all reactions involving ATP.8 ATP supplies the energy for physical activity by releasing energy stored in phosphate bonds. Skeletal and heart muscle use up large amounts of ATP. The energy for muscle contraction is released when one of ATP’s phosphate bonds is broken, in a reaction that produces ADP. Phosphate is added back to ADP, re-forming ATP. ATP also powers the cellular calcium pump, which allows muscle cells to relax. Because it participates in these ATP-controlled processes, magnesium is vitally important for muscle contraction and relaxation. By controlling the flow of sodium, potassium and calcium in and out of cells, magnesium regulates the function of nerves as well as muscles.9
Helps maintain a normal, regular heartbeat*

Supports overall cardiovascular health*
Magnesium’s importance for heart health is widely recognized. The heart is the only muscle in the body that generates its own electrical impulses. Through its influence on the heart’s electrical conduction system, magnesium is essential for maintenance of a smooth, regular heartbeat.10 Magnesium appears to help the heart resist the effects of systemic stress, and magnesium supplementation has been found to promote heart health even in the absence of an actual magnesium deficit in the body.11 From 1925 to the present day, researchers have been conducting studies to investigate the link between magnesium and a healthy blood pressure.2 Evidence from these studies has led to recommendations in European, American, Canadian, and International guidelines about maintaining an adequate magnesium intake to promote a healthy blood pressure.12
In a Harvard study that followed 39,633 men for 12 years, the investigators noticed a modest positive relationship between magnesium and heart health in the subjects.13 In a recent study of women aged 47–75, higher magnesium intake was not only associated with a healthy heart rate, it was also associated with blood sugar balance, healthy cholesterol levels, and more efficient cellular metabolism.14

Numerous studies, large and small, have examined the relationship between magnesium and bone health. The dietary intakes of magnesium, potassium, fruits and vegetables are associated with increased bone density in the elderly.17 In a study of 217 elderly subjects of both sexes, a decrease in bone mineral density was associated with lower blood magnesium levels.18 Research also suggests that magnesium may help support bone mineral density in females across the age spectrum. In a pilot study that followed 50 girls (ages 8–14) who were assessed as having low dietary magnesium, girls receiving supplementation for 12 months saw higher bone mineral content of the hip than those taking placebo.19 In a two-year open, controlled trial, 22 out of a group of 31 older women who took daily magnesium supplements showed gains in bone density, while a control group of 23 women not taking the supplements had decreases in bone density.20
Maximizing Absorption: Chelated Minerals Explained*
Mineral absorption occurs mainly in the small intestine. Like any mineral, magnesium may be absorbed as an ion, a mineral in its elemental state that carries an electric charge. Mineral ions cross the intestinal membrane either by simple diffusion or through active transport by a protein carrier embedded in the cells lining the membrane inner wall. The magnesium in mineral salts is absorbed in ionic form. However, absorption of ionic minerals can be compromised by any number of factors, including: 1) Low solubility of the starting salt, which inhibits release of the mineral ion, and 2) Binding of the released ion to naturally occurring dietary factors such as other minerals, phytates, and fats, which form indigestible mineral complexes.21
Unlike mineral salts, which must be digested by stomach acid before the desired mineral portion can be released and absorbed, mineral chelates are not broken down in the stomach or intestines. Instead, chelates cross the intestinal wall intact, carrying the mineral tightly bound and hidden within the amino acid ring. The mineral is then released into the bloodstream for use by the body. Research by pioneers in the field of mineral chelation and human nutrition indicates that the bestabsorbed chelates consist of one mineral atom chelated with two amino acids. This form of chelate is called a dipeptide; compared to other chelates, dipeptides have the ideal chemical attributes for optimum absorption.22 Dipeptide chelates demonstrate superior absorption compared to mineral salts. For example, a magnesium dipeptide chelate was shown to be four times better absorbed than magnesium oxide.23
Consumer Alert!
Not All "Amino Acid Chelates" Are True Chelates
In order for a mineral supplement to qualify as a genuine chelate, it must be carefully processed to ensure the mineral is chemically bonded to the amino acids in a stable molecule with the right characteristics. The magnesium glycinate/lysinate in High Absorption Magnesium is a genuine dipeptide chelate. It has a molecular weight of 324 Daltons, considerably lower than the upper limit of 800 Daltons stated in the definition of "mineral amino acid chelates" adopted by the National Nutritional Foods Association (now known as the Natural Products Association) in 1996.24
Scientific References
*This statement has not been evaluated by the Food and Drug Administration. This product is not intended to diagnose, treat, cure or prevent any disease.