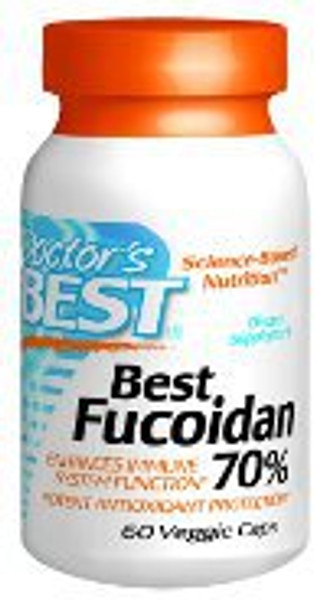 3Best Fucoidan 70% contains the gluconutrient fucoidan derived from brown algae. Seaweeds are a part of the diet in many cultures and fucoidan-containing species have been used traditionally for a variety of therapeutic purposes. Fucoidan contains an abundance of immune-modulating constituents known as polysaccharides.* These unique and complex sulfated polysaccharides are not found in other seaweeds or land plants, and have been shown to mediate a variety of significant biological effects on mammalian cells in laboratory research.* Research also suggests that fucoidan may possess significant antioxidant activity.

Suggested Adult Use: Take 2 capsules daily with a meal, or as recommended by a nutritionally informed physician.

Cell walls from marine algae contain an abundance of sulfated polysaccharides. Fucoidan is one class of these polysaccharides found in brown algae. Polysaccharides are known to have various effects on immune enhancement and possess other biological activities.

Researchers studying fucoidan fractions from algae have tested their ability to enhance immune function in various in vitro assays. In one such study, isolated fucoidan fractions from a water-soluble extract of Fucus vesiculosus as well as commercial sources of fucoidan were shown to enhance resistance and support an immune response by impacting enzyme-mediated replication activity in the cells studied in this assay.1

Further in vitro work confirms the immune modulating activity of fucoidan. Researchers showed that sulfated fucans were able to inhibit complement-mediated destruction of sheep red blood cells and rabbit red blood cells in vitro, suggesting a potential application as immune-supportive agents.2 The complement system is an important component of our immune system that utilizes a cascade of small proteins found in the bloodstream to mount an immune response in the body. In this assay, it was found that the immune-modulating activity increased with increasing molecular weight and with increasing glycolipid content of the fucoidan fractions. This line of in vitro research suggests that fucoidan and its various fractions may be potent balancers of immune function.

Research also suggests that fucoidan may support a healthy cytokine-based immune response and affect immune function at the level of immunomodulatory enzymes. This work was done in the laboratory in human tissue sections. Enzymatic action was shown to be inhibited in these connective tissue sections with the addition of fucoidan fractions, suggesting support of healthy connective tissue by fucoidan.3

The results of these individual assays, when put together, point to the fact that fucoidan possesses the potential to modulate various significant aspects of immune health.

Recently, fucoidans have been theorized to have significant antioxidant potential because of the nature of their chemical structure. In order to support this notion, researchers began performing various assays to measure the antioxidant potential of fucoidan fractions. One such assay is the ferric reducing/antioxidant power (FRAP) assay. This is an in vitro test measuring the ability of a compound to reduce iron, which has a pro-oxidant role in the body. The assay quantifies the ability of the compound being tested to reduce iron, and this correlates to its potential antioxidant activity levels. Using this measure, it was shown that fucoidan fractions increased FRAP values considerably between 4 minutes to 30 minutes of exposure, indicating the antioxidant potential of these compounds. Further in vitro work has also suggested that fucoidans have antioxidant effects. A study assessed the free radical scavenging ability of various seaweed fractions using the DPPH assay. It was shown that seaweed extracts containing fucoidan had the highest activity levels of all the extracts tested in this study.4

With the dual actions of supporting and balancing immune health and possessing free radical scavenging properties, Best Fucoidan 70% extract may be a highly effective supplemental nutrient for maintaining optimal health and wellness.

* These statements have not been evaluated by the Food and Drug Administration. This product is not intended to diagnose, treat, cure, or prevent any disease.