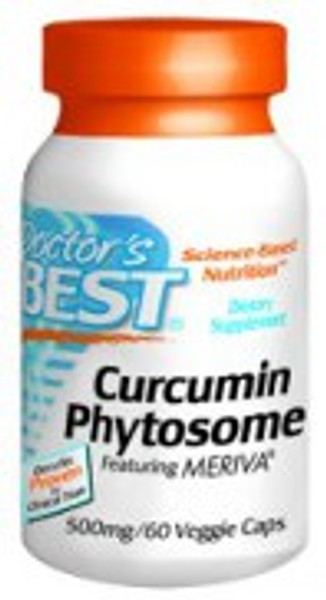 The curcumin nutrient complex is unique for its diverse benefits to human health.
Produced from turmeric root, a traditional food for thousands of years, the complex of curcumin, demethoxycurcumin and bisdemethoxycurcumin is under intensive research scrutiny.1 Yet most curcumin dietary supplements have limited potency, due to their very poor absorption when taken by mouth.2,3 Curcumin Phtyosome featuring Meriva® uses patented Phytosome technology to dramatically improve the curcumins absorption and unleash their total health potential.3 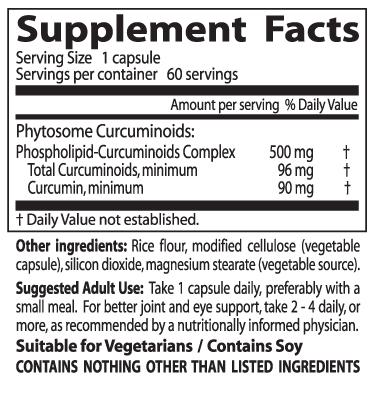 The basic model of a curcumin phytosome: curcumin molecule enwrapped by a molecule of PC ( Phosphatidyl - Choline).5

Phytosomes are molecular complexes formed between individual curcumin molecules and molecules of phosphatidylcholine (PC).3 Curcumin molecules normally mix very poorly into water and so are poorly absorbed when in this medium."1,3 Curcumins formed into phytosomes with PC disperse almost completely into water,1 and when taken by mouth are far better absorbed into the blood than are conventional curcumin supplements.3,4 In addition, the Phytosome technology also harnesses the additional health benefits of PC itself.

Taken daily as a dietary supplement, the curcumin-PC phytosome combination can:

Measurably enhance the benefits of the curcumins.*
Protect the curcumins against premature molecular breakdown.*
Promote healthy functioning of the joints and other organs.*
Support healthy management of C-reactive protein, a bloodborne health indicator.*

The Phytosome technology involves wrapping each curcumin molecule with one or more molecules of PC. This envelope of PC helps the bound curcumin molecule disperse in the water phase while shielding it against water damage. Researchers believe that once the phytosome supplement is swallowed, the unit phytosomes readily diffuse through the intestinal contents, facilitated by PCs excellent miscibility with water.6,7 After a phytosome arrives at an intestinal lining cell, the PC molecule readily merges with the outer cell membrane and the curcumin molecule passes into the cell interior. Subsequently the intestinal cells release the curcumins into the circulating blood, from which they travel to the other tissues.

Another attribute of Phytosome technology is that more than being just the  delivery vehicle, PC is an important substance for life.7,8 PC is a phospholipid (pronounced fos-fo-lip-id) that was one of the first health foods, and multiple clinical trials have documented PCs support for liver, intestinal, lung and circulatory health.8 PCs clinical benefits derive mainly from its central role in cell membranes, the main driving force for all cells.8,9 Once absorbed, curcumin also gets into cell membranes.10

Cell membranes are our cells dynamic action zones. These are the structures that generate energy in the cell and utilize this energy to support virtually all the important life processes.7-9 They are continuous, uninterrupted sheets of molecules, strong yet flexible. The membranes foundation or matrix is always composed mostly of PC molecules, between which are inserted most of the cells catalytic, can-do proteins in the forms of receptors, signal transducers, and various other versions of enzymes.7

PC is a universal building block for cell membranes.8 PC is essential for assembling, maintaining and repairing the membrane matrix, which in turn ensures the structural and functional competence of the entire cell membrane system. Vital to all life processes, PC has been called a Vital Lipid for Life.11 Numerous experimental and clinical studies document that PC helps preserve cell membrane systems against toxic or viral attack.8 And as curcumin enters the cell it specifically binds to the PC in the membrane.10 This is strong indication that these two nutrients complement each others actions to fundamentally support cell membrane competence.

The curcumins are potent cell membrane protectants. They are versatile antioxidants that help prevent free-radical damage from oxygen and nitrogen-centered oxidants.12,13 The curcumins inhibit free radical attack on the cell, whether on the DNA and genes, on the mitochondria that generate energy, or on the membrane system.13 Membranes are especially vulnerable to free radical attack, and the presence of curcumin helps guard them against destruction from lipid peroxidation.10,13 The curcumins protective capacities extend even beyond their antioxidant actions, as evidenced from their capacity to protect joint tissues against runaway destructive activity of the bodys immune system.

Studies with both rats and humans demonstrate that dietary supplementation with the curcumin-PC phytosome results in dramatically higher blood (that is, plasma) curcumin levels, as compared to other curcumins consumed in non-phytosome, conventional molecular forms.4,14,15

In human subjects, the Meriva® curcumin was about 10 times better absorbed, compared to non-phytosome curcumin.14

In a recent double blind human trial,14 Meriva® supported healthy joint function and down-regulated molecular triggers of tissue damage.  The most favorable indicator of Meriva®s benefit in this trial was treadmill performance. After 2 months on Meriva®, the average distance walked at a brisk 3 kilometers per hour, with a treadmill incline of 10 percent, was significantly improved as compared to placebo. This impressive human finding on joint support was consistent with other positive findings from controlled studies with horses and dogs.15 In these veterinary studies, the identical phytosome preparation improved joint health and lowered TNF (tumor necrosis factor), a cytokine messenger molecule known to trigger damage to the joints and other tissues.

In experiments with cultured cells, which bypass bioavailability limitations since the curcumins can be added to the culture at any desired concentration, the curcumins support processes that favor joint building while opposing those processes that favor joint breakdown.16 The curcumins also down-regulated immune system cytokine messengers linked to joint tissue breakdown, most notably TNF, IL-1B (Interleukin-1 beta) and IL-6 (Interleukin-6). At a higher level of control, the curcumins also down-regulated NF-kB (Nuclear Factor-kappa B)17 and AP-1 (Activating Protein-1),18 master regulators of the genes that code for COX-2 (cyclo-oxygenase 2), lipoxygenases and other joint-destroying enzymes.12,18,19

The key to success in the human double-blind trial was Meriva®s measurably superior delivery of curcumins to the tissues.14 This trial also demonstrated that Meriva® could significantly down-regulate C-reactive protein (CRP), a clinically relevant indicator of whole-body health as well as joint health.

C-reactive protein is produced by the liver and released into the blood, and highly-sensitive blood CRP level (hs-CRP) is increasingly employed as a biomarker particularly for cardiovascular health.20,21 Blood hs-CRP normally is very low in healthy individuals, but predictably becomes increased when the immune system is active against tissue damage.22 Substantial clinical research indicates that low blood CRP is consistent with relatively good health and conversely, that elevated CRP is a harbinger of impaired function.20-22 In the human Meriva® trial,14 those subjects who received Meriva® had a marked lowering of their elevated CRP levels after 2 months. This was a statistically significant benefit as compared to the placebo group, which experienced no appreciable lowering of CRP.

Curcumin and its related curcumins from turmeric root have been a revered traditional cure-all for millennia.1 Modern science and clinical medicine has objectively verified a great many of these traditional folk applications. Now that the curcumins can be effectively delivered to the human tissues via Phytosome technology, their benefits observed experimentally are now available to all. For improved wellbeing and for optimal health long-term, Curcumin Phtyosome featuring Meriva® is the gold standard of curcumin dietary supplements.
Meriva® is a registered trademark of Indena S.p.A., Milano