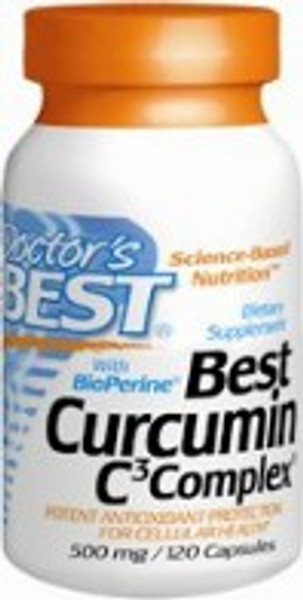 Best Curcumin C3 Complex® with BioPerine® contains a potent standardized extract of Curcuma longa root, commonly known as turmeric. Turmeric is the yellow spice that gives flavor to curried dishes. The herb has been used in the Ayurvedic healing tradition for centuries as a folk remedy. The active ingredients in Curcuma longa are plant substances called curcuminoids, compounds that demonstrate potent antioxidant properties in scientific studies.* Curcuminoids may benefit the joints, brain, heart and the circulatory system by helping to neutralize free-radicals.*

Best Curcumin C3 Complex® with Bioperine® tablets and capsules contain a potent standardized extract of Curcuma longa root. Commonly known as turmeric, Curcuma longa has many culinary uses and is widely known as a spice imparting both color and flavor to curried dishes. It has likewise been appreciated for centuries in the Ayurvedic healing tradition. The known active components in Curcuma longa are a group of compounds collectively called curcuminoids, a class of analogues that have demonstrated potent antioxidant properties and a wide spectrum of complex molecular actions that have been uncovered through extensive research. Although the term curcumin is routinely used as a name for curcuminoids, pure curcumin is just one of the naturally occurring curcuminoids. Curcumin C3 Complex® (95% total curcuminoids) supplies the 3 prominent curcuminoids from turmeric: pure curcumin (diferuloyl methane), bisdemethoxy curcumin (BDMC), and demethoxy curcumin (DMC). BioPerine®, an extract of black pepper fruit that contains 95-98% piperine, is added as a natural bioenhancer to promote absorption of the product.
*More information below supplement facts* 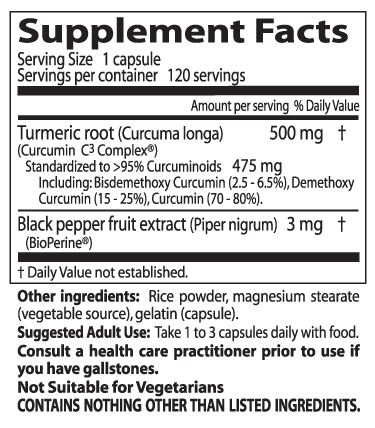 Turmeric has been used in liberal quantities since ancient times as a spice in curry dishes and as a cosmetic and coloring dye, as well as being used for centuries as an herbal remedy and tonic. Animal studies assessing the safety of curcumin have yielded no toxic effects. Human clinical trials using doses between 1 to 8 grams per day of curcumin for periods of 6 to 8 months have also shown this compound to have an excellent safety profile.19

Traditional Ayurvedic herbal formulas often include black pepper and long pepper as synergistic herbs. The active ingredient in both is the alkaloid piperine. Experiments carried out to evaluate the scientific basis for the usefulness of peppers have shown that piperine significantly enhances bioavailability of simultaneously consumed substances.20 Several double-blind clinical studies have confirmed that BioPerine® increases absorption of nutrients. While curcumin by itself is poorly absorbed in the intestinal tract, concomitant administration of piperine with curcumin increases the bioavailability of curcumin by 2000%.21

Much of what science has learned about the physiological effects of curcuminoids has been generated from a full spectrum of study designs using rats and mice or in vitro cell cultures. The advantage of these types of studies is that reactions both to the introduction of toxins and to induced oxidative stress can be measured to assess the potential benefits of curcuminoids towards the maintenance of healthy liver, kidney, and other organ function (when confronted with physiological insults). Curcumin usually turns out to be the strongest of the curcuminoids, although each has its own strengths. Research also suggests that the 3 curcuminoids in Best Curcumin C3 Complex® can have a synergistic effect.3,4

The numerous beneficial effects attributed to turmeric often stem from the antioxidant properties of the curcuminoids within it. This antioxidant activity can neutralize highly unstable molecules, or free radicals, that damage cellular structures through oxidative stress. For example, the BDMC curcuminoid in Best Curcumin C3 Complex® proved most adept at countering lipid peroxidationthe theft of electrons from cell membranes by free radicalsin mice macrophages (immune cells). In fact, BDMC was found to be the best curcuminoid for enhancing the lifespan of mice in this study.3

Due to the potent radical-scavenging activity of curcuminoids, human skin cells oxidized in vitro by the superoxide radical-generating toxin nitroblue tetrazolium fared better when curcumin or a mixture of the 3 curcuminoids was administered. Furthermore, the 3 curcuminoids had a greater effect than an equal amount of curcumin alone, suggesting synergistic action.4 Another study using skin cells found that curcuminoids supported antioxidant enzyme activity and cellular antioxidant defense capacity under exposure to Ultraviolet A (UVA) irradiation. 5 This matters to us because UVA radiation from sunlight can accelerate skin aging. Between these in vitro studies, results suggest that curcumin may help to promote a more graceful aging of the skinand that a combination formula of all 3 curcuminoids may be even better.

A plethora of animal studies have illustrated the ability of curcumin to modulate cell behavior and answer to physiological insults such as toxins. Curcumin enhanced stability of the glyoxalase system put under stress in mice, leading the authors to conclude that curcumin may be able to afford humans the same type of advantage against background radiation.6 In other studies, curcumin stimulated enhanced liver function in rats exposed to carbon tetrachloride (CCl4), a potent toxin.7 Another group of researchers who exposed mice to ferric nitrilotriacetate (Fe-NTA) found that curcumin enhanced kidney function to favor a better outcome.8 These researchers note that on top of its antioxidant activity, curcumin appears to enhance activities of enzymes that promote normal detoxification of everyday toxins. It is believed that curcumin may help induce phase II enzyme activitya very important step in the detoxification process.

Additional studies have shown that curcumin administered to rats following the administration of pro-oxidant chemicals altered serum levels of alanine aminotransferase (ALT) and thiobarbituric acid reactive substances (TBARS), which are major indicators of lipid peroxidation and oxidative stress.9 These results further suggest that curcumin may enhance the detoxifying ability of the liver. A recent study in rats looking at the effect of turmeric extract versus the toxin doxorubicin (DOX) led the scientists to conclude that turmeric extract provided antioxidant defense for multiple organs, including the heart, liver, and kidneys.10 Together, all of these in vivo results strongly suggest that curcumin is a potent defender with a potentially wide range of applications.

Curcumin also exhibits free radical scavenging ability when administered to humans. In an open trial 18 healthy individuals ranging in age from 27 to 67 years consumed a Curcuma longa extract for 45 days at a dose supplying 20 mg curcuminoids. Before and after blood tests showed a statistically significant decrease in lipid peroxides.11

Several in vitro investigations point to the ability of curcuminoids to help regulate immune mediators involved in promoting normal joint function and to promote a balanced immune response in joint tissue. In vivo results from animal studies endorse this potential action of curcumin. One group of researchers found that turmeric extract inhibited chemokines and prostaglandin E2, and that the 3 curcuminoids (curcumin, BDMC, and DMC) were the active agents supporting the desirable effects. Remarkably, they were also able to show that the curcuminoids helped to maintain healthy joint structure, presumably by interacting with osteoclasts.12, 13 In another rat model of joint function, oral administration of curcumin was shown to modulate levels of a glycoprotein involved in the joint immune response, contributing to the maintenance of healthy joint tissue.14

A 2005 study has investigated the ability and potential of curcuminoids to support healthy brain aging and maintenance of cognitive function. A large number of both in vitro and in vivo (animal) studies confirm the ability of curcumin to enhance neuron integrity, chiefly through the free radical scavenging abilities of this compound. When animals were administered compounds with known brain toxicity, subsequent administration of curcumin led to a significantly more balanced neurological outcome when compared to control animals.15 Oral administration of curcumin in rats exposed to a neurotoxin that humans are commonly exposed to promoted lipid integrity, reduced levels of free radical metabolites, and increased levels of glutathione, a major physiologic antioxidant.16 Curcumin is thought to produce these antioxidant effects in brain tissue due to its ability to readily cross the blood-brain barrier.

Further studies suggest that curcumin is one of the few compounds that are actually likely to support youthful brain aging. Tetrahydrocurcumin, a major metabolite of curcumin, has been shown to contribute to the life span of middle-aged mice. Additional animal research has shown that long-term administration of curcumin supported brain lipid integrity and favorably altered the brain-aging marker known as lipofuscin. Curcumin has also been shown to increase the activity of numerous enzymes that support antioxidant defenses.17 Curcumin pretreatment of rat PC12 (neuronal) cells in vitro recently helped scientists to determine some proposed mechanisms of action. They concluded that low-dose curcumin helped maintain cell healthand the integrity of DNA within themthrough inhibition of oxidative stress, calcium influx, and hyperphosphorylation.18 These findings display the ability of curcumin and its metabolites to promote healthy brain aging mainly by fighting age-related oxidative stress.

In 2009 a fascinating neuronal study cropped up, this time examining effects of the curcumin/piperine combination on behaviors elicited through chronic stress.19 In it, rats were subjected to stress that led to behavior different than that of rats not subjected to stress. Curcumin significantly alleviated stress in the rats, as measured through both behavioral and biochemical testing. Furthermore, the combination of curcumin with piperine was more potent than curcumin alone.