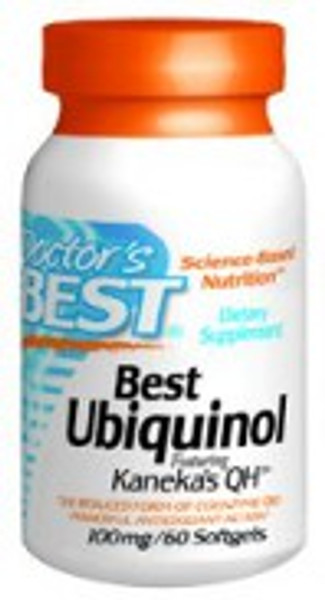 Best Ubiquinol featuring Kaneka's QH contains the reduced form of coenzyme Q10.  Both ubiquinol (CoQ10-H2) and ubiquinone (CoQ10) are metabolically active, and are interchange- able in the body according to needs.  Each form has unique roles in cells including antioxidant actions, supporting healthy heart functioning and enhancing energy production*. Oral ubiquinol may offer improved bioavailability in individuals who have difficulty achieving high levels of this nutrient, such as aging adults or those concerned with nutrient absorption*.

Nothing beats CoQ10 when it comes to energizing your heart and protecting your cells from free-radical damage. And the only form many doctors recommend taking is ubiquinol CoQ10the form your body absorbs and uses best. Ubiquinol dissolves in water and fat while ubiquinone only dissolves in fat and to get best absorption of ubiquinone one should take it with fish oil or Vitamin E.

Best Ubiquinol featuring Kaneka QH contains the reduced form of coenzyme Q10. Both ubiquinol (CoQ10-H2) and ubiquinone (CoQ10) are metabolically active, and are found naturally in the body and in food sources. The two forms are interchangeable as the body appears to keep the reduced and oxidized forms in the total pool at a constant ratio.1,2,3 Each form has unique roles to play in cells including antioxidant actions and enhancement of energy production in the mitochondria. The commonly available supplement form of coenzyme Q10 has been the oxidized form (ubiquinone), as until recently the reduced form was difficult to manufacture due to its rapid oxidation in the air. New technology has allowed for the manufacturing of stable coenzyme Q10 in the reduced form.4 The results from an animal study that compared the absorption of the two different forms, as well as a human study showing significant absorption of ubiquinol, together suggest that taking ubiquinol orally may offer improved bioavailability in individuals who have difficulty achieving high levels of this nutrient, such as aging adults or those concerned with nutrient absorption.4* Comparison studies of the two forms are now necessary in humans to confirm this idea, as well as determine the specific circumstances under which ubiquinol may be more beneficial.
*More information below supplement facts*
Suggested Use: Take 1 softgel daily with food, or as directed by a natritionally informed physician.
Other Ingredients: Extra virgin olive oil, medium-chain triglycerides, beeswax, rosemary leaf extract, vitamin E (as-d-alpha tocopherol), soy lecithin, gelatin (capsules), glycerin, annatto (color).

A recently published single-blind placebo-controlled study in healthy subjects found no safety concerns in people who took Kanekas QH ubiquinol supplement orally at doses of up to 300 milligrams daily for up to four weeks.4 Single oral doses of either 150 milligrams or 300 milligrams were given to fifteen healthy men and women, and standard laboratory testing (including hematology, blood chemistry, and urinalysis) as well as physical examination and electrocariography (EKG) results showed no clinically significant changes when tested two days after supplementation as compared to before the taking the supplement. In addition to the single dose study, 80 healthy volunteers were given either placebo, 90, 150 or 300 milligrams of ubiquinol each day for four weeks, and again no clinically significant differences were seen in any of the testing parameters after two and four weeks of supplementation, nor were there differences two weeks after discontinuation of the supplement. By monitoring levels in the blood, the authors found that ubiquinol was well absorbed.4

Studies in several animals also reveal no concern of toxicity in doses of ubiquinol up to 200 milligrams per kilogram of body weight for up to thirteen weeks.4 When compared to humans, this dose level is enormously higher than the recommended doses. Supplementation with ubiquinol appeared to be safe at even higher levels (up to 600 milligrams per kilogram body weight) in a study using a different animal. In vitro assays additionally found no safety concerns for the use of ubiquinol, as it was found to be non-mutagenic and did not cause damage to chromosomes in cells.

Although ubiquinone (oxidized coenzyme Q10) and ubiquinol (reduced coenzyme Q10) are kept at a constant ratio within the body, the majority of the total coenzyme Q10 pool is made up of ubiquinol. In fact, when ubiquinone is taken orally, much of it appears to be rapidly converted into ubiquinol. 1,4 Ubiquinol functions as a potent antioxidant in humans, including in low-density lipoproteins (LDLs) where it protects them from oxidative damage.1,4,5 The coenzyme Q10 molecule can be found in all membranes throughout cells.6 It appears to works in conjunction with both vitamin E and vitamin C to provide antioxidant actions throughout the body.7

Coenzyme Q10, with its widespread distribution throughout the body, plays a crucial role in mitochondrial physiology as a critical member of the electron transport chain. This transport chain, which is part of cellular respiration, leads to the formation of adenosine triphosphate (ATP), our bodys primary energy source. Levels of this key nutrient may decline as a healthy person ages.7,8 Animal studies have found that supplementation can restore normal levels in certain tissues 6, and human studies suggest that supplementing with this enzyme may have increased benefits when a person has depleted levels.7

Concentrations of coenzyme Q10 are understandably high in the heart as these muscle cells require high levels of energy to constantly function optimally. A number of studies (both animal and human) strongly suggest that coenzyme Q10 supplementation is supportive for healthy heart functioning and for maintaining cardiovascular system health.7,9
Scientific References
*This statement has not been evaluated by the Food and Drug Administration. This product is not intended to diagnose, treat, cure or prevent any disease.