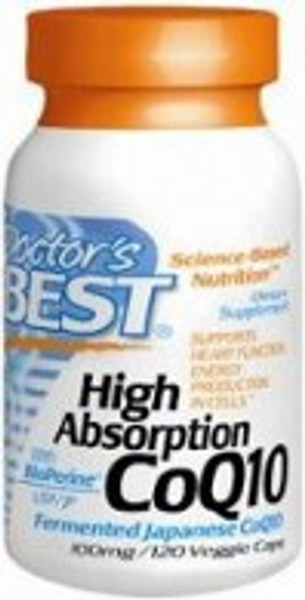 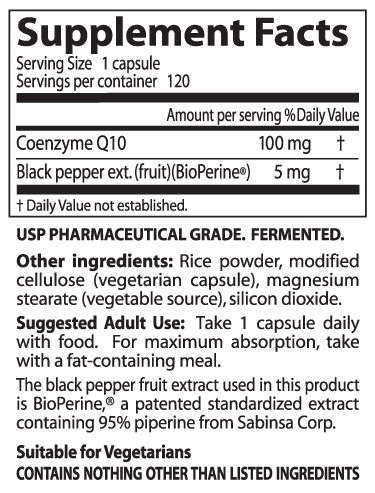 Coenzyme Q10 is a vitamin-like nutrient central to energy production at the cellular level, essential for generating metabolic energy in the form of ATP. CoQ10 is also a versatile antioxidant, stabilizing cell membranes (helping to protect them from free radical damage) and contributing to their fluidity.2 Coenzyme Q10 levels decrease with age, a factor that may actually contribute to the aging process.3 Since food content of CoQ10 can be very low, many healthcare providers recommend supplementing with Coenzyme Q10.

Due to the extraordinary energy requirements of our hardworking heart, the highest concentration of CoQ10 is found in heart muscle tissue. Coenzyme Q10 is known to support the heart through mitochondrial bioenergetics, the process of cellular energy transformation. On top of this, CoQ10 helps to promote overall cardiovascular health by confronting oxidative stress in heart and endothelial (blood vessel wall) cells.4

In terms of bioenergetics, CoQ10 supplementation acts to preserve energy turnover in mitochondria—our cellular powerhouses—by keeping ATP synthesis at optimal levels.5 Maintenance of normal energy utilization and supply is crucial for maintaining the cell’s ideal biochemical state. Based on results from clinical studies, researchers have concluded that some segments of the population can achieve an increase in needed ATP production in addition to other benefits from CoQ10 supplementation.6

Also in the cardiovascular realm, there has been longstanding interest in the use of Coenzyme Q10 supplementation to work against the oxidative stress that takes a toll on circulating blood lipids. In addition to reacting directly with peroxyl radicals, CoQ10 indirectly helps quench radicals by regenerating the active form of vitamin E. This type of antioxidant activity is key to enhancing the structural integrity of lipids and supporting healthy blood vessels and circulation.6

Given all of these cardiovascular findings, it may not be surprising to learn that the effect of CoQ10 on blood pressure has been a topic of scientific research since 1975. A metaanalysis of such studies noted Coenzyme Q10 supplementation as one useful and safe tool in the maintenance of a healthy blood pressure, complementing the endothelial support and antioxidant advantages it provides.7,8

Many widely used statin drugs that are taken to alter cholesterol levels also have an unfortunate nutritional side effect: they are known to deplete the body’s CoQ10 by blocking its synthesis.9 Supplemental CoQ10 can be taken in anticipation of this particular drawback, with 30 days of CoQ10 supplementation in a recent study showing positive change in undesirable effects attributed to statininduced CoQ10 disruption.10

When the immune system goes into battle for us, immune cells need large amounts of energy to carry out their defensive functions. Among the most metabolically active of the body’s cells, they accordingly have large requirements for CoQ10.3 Although not extensively studied in humans, there is some clinical evidence that supplementing with CoQ10 can benefit the immune response.11 Researchers suggest that these immune enhancing actions can particularly benefit elderly people, since CoQ10 production decreases with age (levels steadily fall after the age of 40).

Versatile Antioxidant Support*
Regenerates Other Antioxidants in the Body*

Within the cell, antioxidants work as a team to keep free radicals from damaging cell structures. In order to neutralize a free radical, an antioxidant such as vitamin E must give up an electron, which means it becomes oxidized. Before it can function as an antioxidant once again, it must be regenerated back to its "reduced" form by gaining an electron to replace the donated electron. For this, it needs the help of other antioxidants. Vitamin C, vitamin E, glutathione, and alpha-lipoic acid are key antioxidants that cycle between their oxidized and reduced forms. This is necessary to maintain the balance between oxidation and its reverse––the neutralization of free radicals by antioxidants.

Coenzyme Q10 is a unique fat-soluble antioxidant referred to as ubiquinone —or ubiquinol in its reduced form—because it is “ubiquitous” (everywhere present), that is found in almost all living cells.12 In a randomized, double-blind, placebo-controlled study where subjects had lower than usual blood concentrations of the antioxidant vitamins A, C, E, and beta-carotene, 28 days of CoQ10 supplementation provided a significant increase in blood levels of these antioxidants, compared to placebo. Vitamin E regeneration upon administration of CoQ10 has been observed in several studies.13

Beyond its essential bioenergetic actions and the fat-soluble antioxidant power it offers in helping to secure the integrity of our neurons and cardiovascular tissue, Coenzyme Q10 is being studied for several different health applications. Researchers have concluded that due to its ability to inhibit collagenase, CoQ10 can aid in the reconditioning of wrinkled skin (caused by ultraviolet-B light).4

Numerous studies have been carried out to investigate the relationship between CoQ10 and exercise, physical performance, or energy metabolism. In one such recent study, researchers looked at the effect of CoQ10 supplementation on the autonomic nervous system, which is integral to energy metabolism. They discovered that subjects administered supplemental CoQ10 experienced increased oxidation of fat (enhanced fat metabolism) during low intensity exercise. Although larger studies are needed to confirm this finding, it introduces exciting new prospects for the use of supplemental CoQ10.14
Scientific Reference

*These statements have not been evaluated by the FDA. This product is not intended to diagnose, cure or prevent any disease.