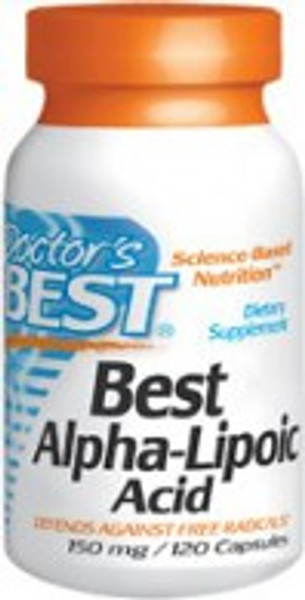 Alpha-lipoic acid (ALA, thioctic acid) is a naturally occurring vitamin-like nutrient that has been intensely investigated as a therapeutic agent for a variety of conditions involving the bodys nervous, cardiovascular, immune, and detoxification systems. It exists as two enantiomers or stereoisomers: R-(+)-lipoic acid (RLA) and S-(-)-lipoic acid (SLA). It is produced in small amounts in the liver and other body tissues, where it is needed by enzymes to catalyze numerous essential chemical reactions in the body. For instance, ALA is essential inside the mitochondria of cells, where it is needed to metabolize glucose and direct calories into energy production.

ALA is considered to be a multimodal supplement because, aside from its enzymatic role in energy production, it acts by multiple mechanisms and displays diverse pharmacologic and antioxidant properties. Recently discovered is ALAs ability to switch the regulation of several genes linked to cell survival, inflammation and oxidative stress. So in addition to its enzymatic role, ALA is a powerful antioxidant and performs a number of other vital functions related to its ability to modify the expression of various genes. ALA is therefore not so much a direct benefit to cells, but rather an indirect aid that "kick starts" declining function in cells, helping them recover the functions that came more easily and naturally in the young. 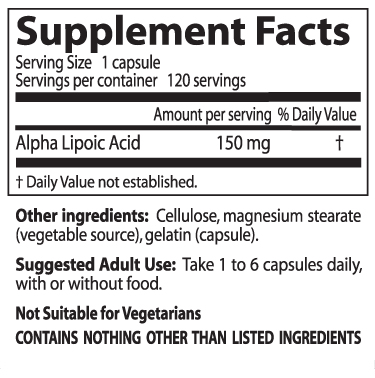 Alpha-lipoic acid is a sulfur-containing fatty acid that performs vitamin-like roles in the body. Also known as lipoic acid (LA) or thioctic acid, it functions as a co-enzyme in the metabolism of carbohydrates, and is in this way similar to B-complex vitamins. LA is required for synthesis of acetyl CoA, a key metabolite in the cellular process that turns glucose (blood sugar) into energy. Because the body produces LA on its own, it is not classified as a true vitamin. As with other so-called "non-essential" nutrients, however, internal LA production may not always be optimal.

Alpha-lipoic acid functions as both a water-soluble and fat-soluble antioxidant. Free radicals are normal by-products of metabolism that, while necessary at normal levels, may damage tissues over time if not properly kept in check by antioxidants. Lipoic acids ability to neutralize free radicals in both watery and fatty environments makes it a highly versatile antioxidant. In the body, alpha-lipoic acid can be converted (reduced) to DHLA, or dihydrolipoic acid, a potent mitochondrial antioxidant. It is not necessary to take DHLA as a supplement, as the body may readily convert LA to DHLA.

Recycles antioxidant nutrients such as Vitamin C and Vitamin E*

An ideal antioxidant would have the ability to quench a wide variety of free radicals, to support the functioning of other antioxidants, to bind or chelate metal ions that can generate free radicals, to function in watery and fatty environments, and to be present in tissues, cells, and extracellular spaces. Having exceeded these criteria, Lipoic Acid was termed the universal antioxidant.5

As a team, LA and DHLA come close to the ideal, for the following reasons:6-8

2) LA is readily converted to DHLA in various tissues.

3) As a pair, LA and DHLA neutralize superoxide, hydroxyl, peroxyl, and hypochlorus radicals.

5) LA and DHLA scavenge free radicals in both fatty and watery environments.

Within the cell, antioxidants work as a team to keep free radicals from damaging cell structures. In order to neutralize a free radical, an antioxidant such as vitamin C must give up an electron, which means it becomes oxidized. Before it can function as an antioxidant once again, it must be regenerated back to its "reduced" form by gaining an electron to replace the donated electron. For this, it needs the help of other antioxidants. Vitamin C, vitamin E, and glutathione are key antioxidants that can be generated by cycling between their oxidized and reduced forms. This is necessary to maintain the balance between oxidation and its reversethe neutralization of free radicals by antioxidants.

DHLA is an essential component in the interaction between these antioxidants, as well as being able to recycle coenzyme Q (CoQ). Studies show that addition of alpha-lipoic acid to liver tissues results in increased vitamin C levels. It has been found that DHLA is responsible for regenerating vitamin C, which in turn regenerates vitamin E.8 DHLA also converts glutathione from its oxidized form back into its free radical scavenging reduced form.8, 9 The LA/DHLA pair is thus vital for answering "oxidative stress," which occurs when the balance is tipped in favor of oxidation in cells.10 DHLA helps preserve antioxidants in both the watery cell interior and the fatty structure of cell membranes.5 Evidence from animal studies suggests the free radical-scavenging activity of DHLA in the mammalian brain.11

Alpha-lipoic acid is a key factor in the cellular process that metabolizes glucose for energy production. Researchers have noted that for a non-hormonal compound, LA is remarkable for its effect on carbohydrate metabolismespecially the R-lipoic form of alpha-lipoic acid. For example, in vitro studies have shown the ability of RLA to promote rapid uptake of glucose in muscle and fat cells.12, 13 The impact of lipoic acid administration in promoting healthy blood sugar metabolism is also evidenced in numerous animal and human studies.14, 15 In one rat study, the known benefit of exercise on glucose uptake was complimented by 30 mg of RLA per kg body weight for 2 weeks. Glucose uptake into muscle increased by 45% in sedentary rats given RLA (compared to rats not receiving RLA); when the rats combined treadmill exercise with the RLA administration, glucose uptake jumped to 124% (compared to only 68% in rats given exercise but no RLA).16 After helping to initially increase glucose uptake into cells, RLA subsequently increases glucose utilization via activation of an enzyme complexcalled the pyruvate dehydrogenase complexinvolved in energy production inside the mitochondria of cells.17 LA is cited especially for its ability to reduce oxidative stress in the context of the important relationship between healthy blood sugar levels and vascular health.18

As we age, our ability to synthesize lipoic acid decreases. Age also brings an accumulation of oxidized proteins that interfere with mitochondrial efficiency. LAs status as a so-called mitochondrial nutrient addresses this situation.19 Furthermore, aging is accompanied by a decreased ability of the liver to recycle ascorbic acid following oxidative stress. R-lipoic acid, after two weeks of supplementation to aged rats, reversed the age-related impairment of ascorbic acid recycling and concentration in liver cells.20 A second study confirmed these results.  Researchers determined that an RLA-supplemented diet fed to old rats for two weeks resulted in improved mitochondrial function, decreased free radical damage, and increased metabolic rate. Whereas a significant decline was seen in ascorbic acid and glutathione levels in the livers of the control rats, the RLA-supplemented group showed no decline in the levels of these critical antioxidants.21

Aging is associated with oxidative stress in the brain. The brain's high rate of metabolism and its long-lived neurons make it particularly vulnerable to oxidative stress. Since LA interrupts cellular oxidative processes in both its oxidized and reduced forms, it plays a modulatory role in the brain and nervous system. One group of researchers found that LA decreased oxidative stress in the brain mitochondria of aged rats.22 This kind of activity inside of neurons may help explain the observed effect of LA administration on cognitive upkeep in an animal model. Evidence of cognitive benefits has cropped up in multiple studies on normal old mice, including one where longer-term memory was enhanced by LA.19 There are probably several mechanismsin tandem with decreased oxidative stressbehind the cognitive support seen in these animal studies, including stimulated production of acetylcholine and enhancement of memory-related signaling pathways.19 Preliminary research on humans suggests that LA supports sustained cognitive function in older age.23, 24

Studies also indicate that supplementation with alpha-lipoic acid supports eye health. One of the most toxic chemicals in cigarette smoke, acrolein, is especially harmful to retinal pigment epithelial cells. Rats chronically exposed to low doses of acrolein lose the viability of these cells, showing a decrease in mitochondrial function due to oxidative stress. Pretreatment of these retina cells with LA before the acrolein exposure significantly protected them from oxidative damage.25 RLA is exceptionally suitable for supporting the retina of the eye. This was shown in rats, presumably via prevention of the activation of nuclear factor kappa B, a protein complex found in all cells that is involved in cellular responses to stimuli such as stress, free radicals, and ultraviolet irradiation.26 Studies in rats also demonstrate LAs ability to support healthy retinal capillaries.27

Alpha-lipoic acid may offer several different mechanisms in helping us to maintain cardiovascular health. From animal studies, researchers began to discover the impact of LA on blood lipids over half a century ago.28 Additionally, a recent study in mice demonstrated results seen in previous studies using mice or rats: lipoic acid lowered body weight gain and fat mass.29. Researchers attributed this to appetite suppression and enhanced energy expenditure. Mice in this same study also benefited from lower levels of triglycerides upon LA administration. While the favorable results seen in many of these in vivo studies have not yet been investigated in humans, researchers believe that LA supplementation holds promise for supporting the cardiovascular system through such means as helping to maintain a healthy weight and by promoting healthy lipid metabolism.